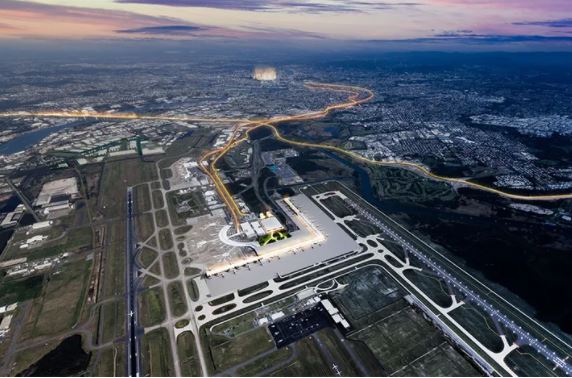 By Team MHREJune 3, 2021August 9th, 2021No Comments
Just the other day the Brisbane Airport Corporation announced that they are planning to build a new terminal for the new second runway.  In fact, they are planning to spend over $1 billion on the third terminal that will connect its dual runways.

The proposed terminal will be a 250,000sq m integrated L-shaped building that services both domestic and international operations, positioned between the two runways.

Brisbane’s new runway is so much more than 3.3km of asphalt and crushed rock.

It has future-proofed operations at Brisbane Airport and is a key enabler for tourism, investment and trade opportunities for the city and state, supporting more than $15 billion of major projects being developed in South East Queensland over the next decade.

So how does this relate to property prices in our region?

Well it comes down to jobs and employment.  There will be more construction jobs for this major project.  That is on top of the current large projects going on in Brisbane at the moment.

Where there is employment, there is a need for people, and those people need homes to live in.  Especially close by so they do not have a long commute.

So the suburbs of Everton Park, Stafford Heights, McDowall are well located to experience even more demand, due to our proximity to the airport as well as the CBD.

The Brisbane Airport area also has a whole range of related businesses and industries establishing headquarters there.  In fact, by 2034 it is estimated Brisbane Airport will directly contribute over $8.2 billion to the Queensland economy and provide nearly 51,000 full-time jobs.

That’s a serious boost to our region.

Owning property right next door to this major employment hub and the CBD positions our local area in great shape moving forward.

A little more about the new Terminal project

Brisbane Airport Corporation (BAC) said the development would be marked for completion in 2032, however, the timeline would be moved forward if Brisbane was confirmed as the host of the 2032 Olympic Games.

“[The new terminal] will be a modern, sustainable green building that harnesses the best of Queensland—its sunshine—alongside engaging retail options and touchless, self-service operations.

“It will also open up new international route opportunities like we saw with Chicago and San Francisco pre-Covid.”

The new runway has now given the airport the largest aviation capacity of any city in Australia, allowing for up to 110 aircraft movements per hour, comparable to major international hubs like Singapore Changi Airport and Hong Kong International Airport.

Brisbane Airport Corporation is also set to spend another $2 billion on major projects over the next five years.

“The aviation industry is resilient and has weathered many storms,” head of infrastructure development Paul Coughlan said.

“Air travel will bounce back, as it did after the 11 September 2001 terror attacks and the global financial crisis. It has always rebounded, and it rebounds strongly.

“Now more than ever, it is crucial that we have the infrastructure and mechanisms in place to allow our great city and state to recover from Covid-19.

“As we emerge from the pandemic, Brisbane Airport will be in the best position possible to attract new airlines and new routes, connecting Brisbane to the world more than ever before.”

Along with a new northern integrated domestic and international terminal, BAC wants to connect the airport precincts together with a new Australian-first airport mass transit system.

As part of the Brisbane Airport 2020 masterplan, BAC is planning a mass transit system that could handle the forecasted 50 million passengers and 50,000 workers that will transit through the Airport precinct by 2040.

According to BAC, an elevated air-train transit system could handle 3200 passengers per hour and take no longer than five minutes.