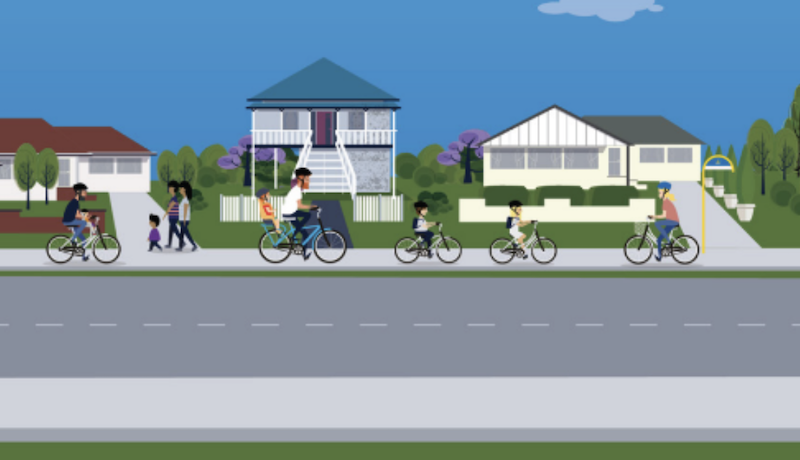 Get on your Bike

With the school holidays well under way and the kids looking for things to do maybe you should consider the many Bike Paths that run through the northern suburbs.   Brisbane’s bikeways are a great way of getting to and from where you are going without the hassles of finding a car park and being stuck in traffic.

Ride around the city

The Brisbane City Council is building a bikeway network for the whole city.

We have some suggestions about where to ride, in these maps below

Brisbane summers are hot, so it’s good to know that leafy parts of the city can be more than five degrees cooler than treeless areas, which make them more pleasant places to ride. Bikeways are often located through parks and alongside waterways.

You will find stretches of leafy shade along:

So have a look at these and get the bike out of the shed, it might be a heap of fun for the family.

The North Brisbane Bikeway is being constructed in stages to connect northern suburbs such as Aspley, Chermside, Kedron, Lutwyche, Wooloowin and Albion to the city centre. The project is a partnership between Council and the State Government.

Currently the stages from Albion are complete, and construction is underway to extend this to Wooloowin.

Council has consulted on a 1.2 kilometre connection from the intersection of Chalk Street and Bridge Street in Wooloowin to the Kedron Brook Bikeway adjacent to Bradshaw Street in Lutwyche.

The existing separated bikeway runs south from Windsor Park towards Victoria Park, and is a direct connection to the Royal Brisbane and Women’s Hospital and the Brisbane Showgrounds. From here, the bikeway is shining brighter than ever, following the completion of the Normanby Fiveways Bikeway lighting project. The bikeway continues through Roma Street Parklands and into the city centre. 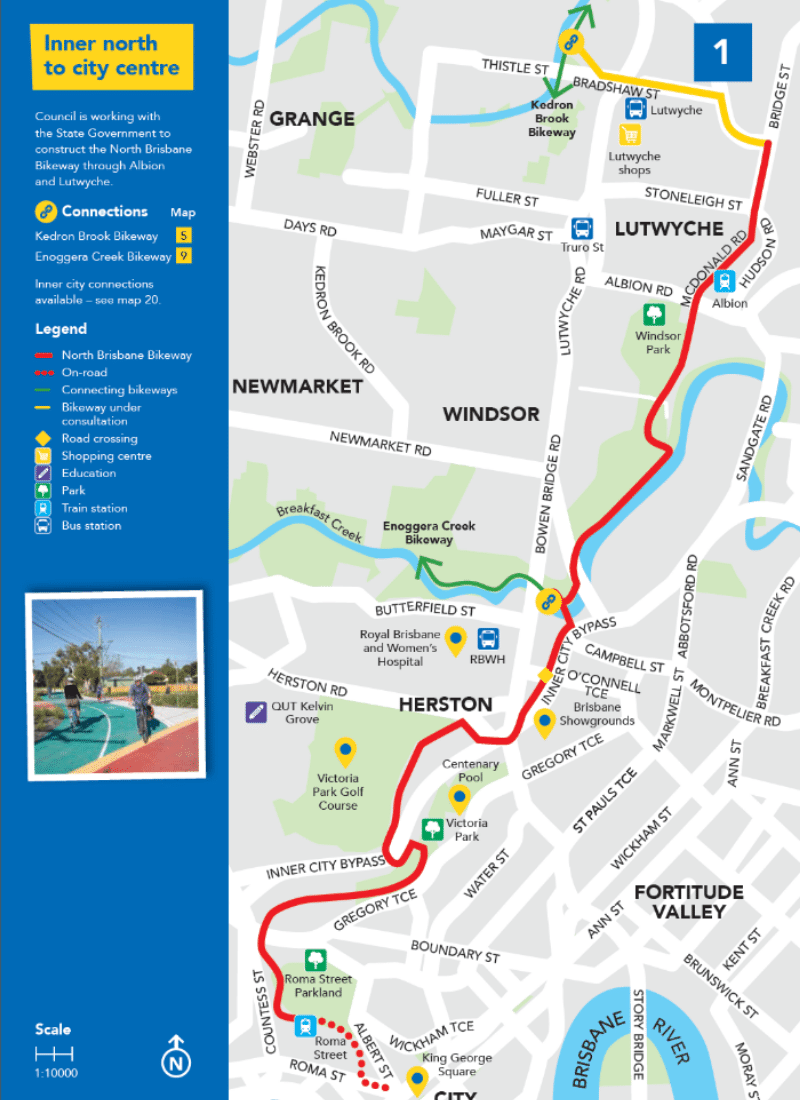 Use the bikeway to get to local schools, shops, sports clubs and busway stations. You can also access many creekside parks, picnic facilities, barbecues and a number of dog off-leash areas. 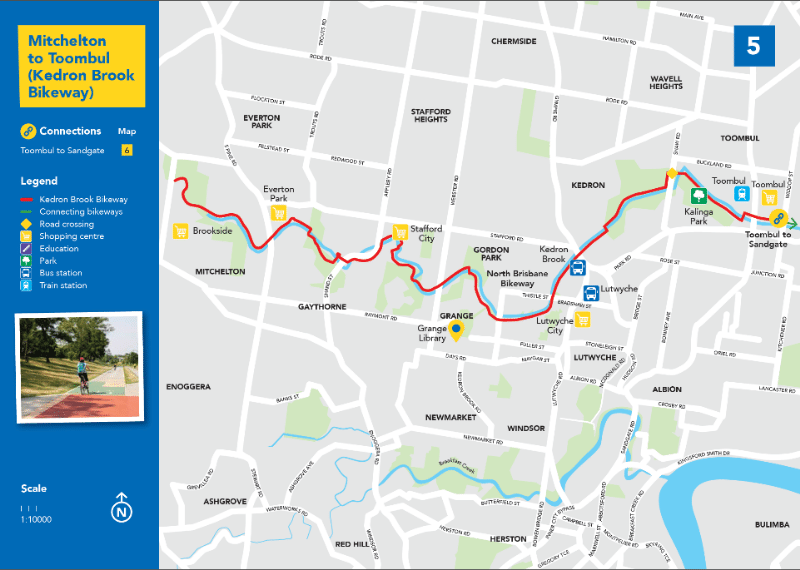 These bikeways connect north Brisbane suburbs to the Sandgate Foreshore and Shorncliffe Pier. The Jim Soorley Bikeway has links with Toombul Station and shops, and the Nundah Criterium Track. From here it continues along the Kedron Brook towards Nudgee Beach and the Boondall Wetlands.

Quiet street links take you to the water with the Sandgate Foreshore to the north (and onward connections to Clontarf) and Shorncliffe Pier to the south. 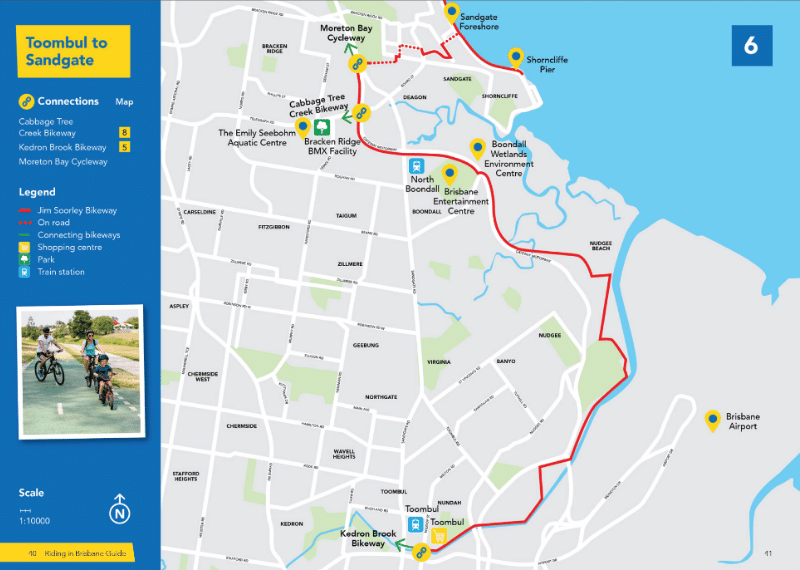 7th Brigade Park features a 500-metre street skills course and is a great location for children to develop their bike riding skills. 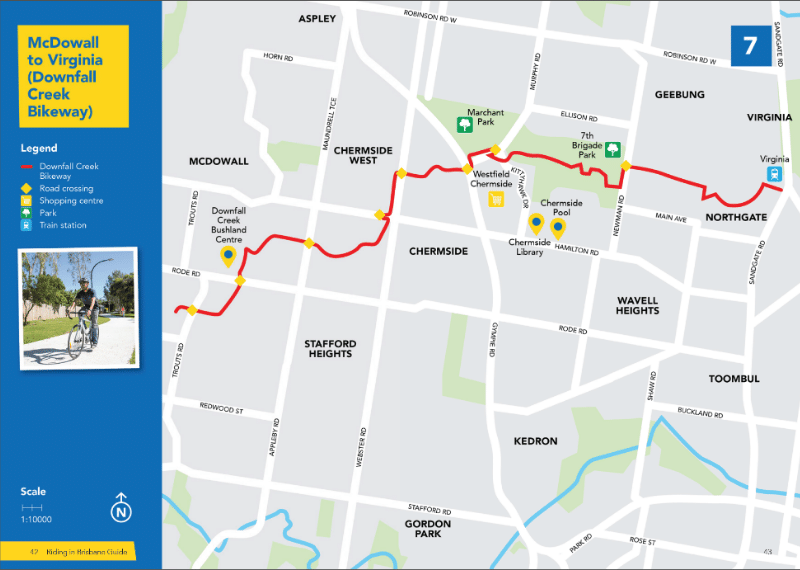 The path runs through McDowall, Aspley, Carseldine, Fitzgibbon and Bracken Ride. It connects to a number of local parks, Aspley Shopping Centre, Carseldine Train Station, the Emily Seebohm Aquatic Centre and the brand new Bracken Ridge BMX Facility. The new state-of-the-art facility is the largest of its kind in Australia, with 640 metres of asphalt track suitable for beginner through to more advanced riders. 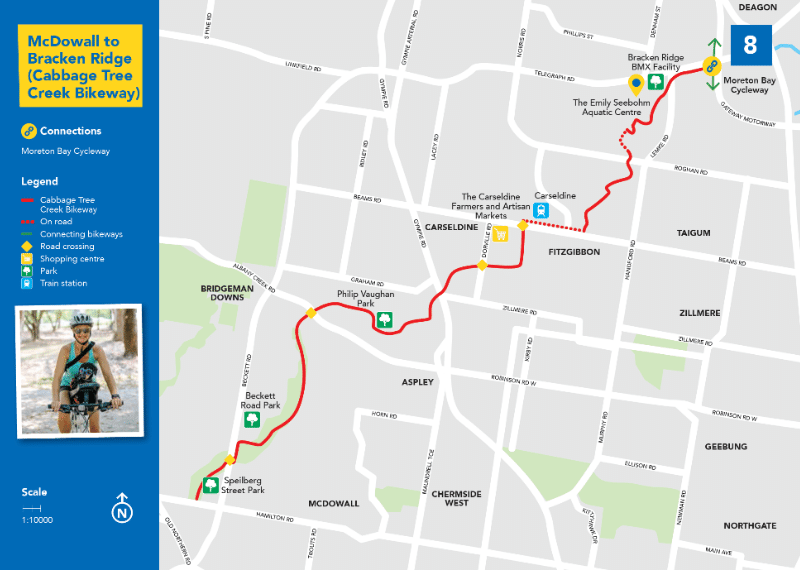 Sourced from the article: Cycling paths of Brisbane 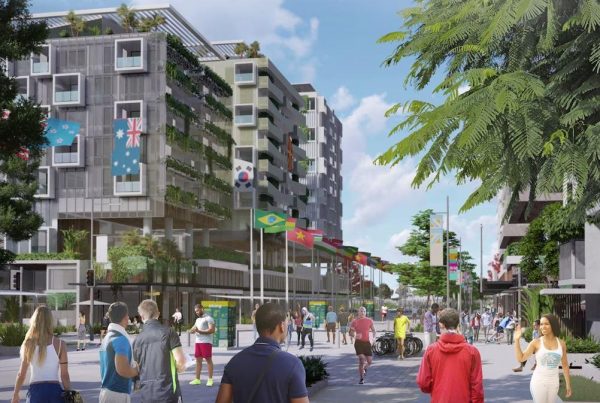